Bill has always worked extensively in the insurance field as well as contracts and personal injury litigation. His primary focus is first party insurance litigation, property damage and bad faith law where he has extensive experience in the court room and has won multiple jury trials.

Bill is married to Michelle and has three children: William, Spencer and Logan. William is a freshman at Florida State University and his daughters are in high school at Maclay.

He has been a member of the Florida Bar since 1994 and is licensed to practice in all state and federal courts in the state of Florida. 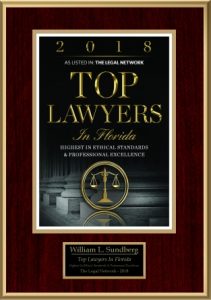